“With deep affection and recollection, I oft time think of those Shandon Bells.”

on June 06, 2017
“With deep affection and recollection


I oft time think of those Shandon Bells.”

Maybe, had I been abroad, an exile, I might have thought of those famous bells more often. But even here, at home in Cork, there are so many reminders: that ever popular song by Fr Prout, the regular sound of the bells themselves and the prominent position of the church and the tower close to and unmissable above the city centre.

Despite all the proximity, it took me a long time to eventually tackle those 132 steps - over seventy years! The actual climb time is a few minutes. But, steep and in a confined passageway, they are not the easiest of steps, so do take it easy and read the notices, heed the hints at the office as you pay the small fee. 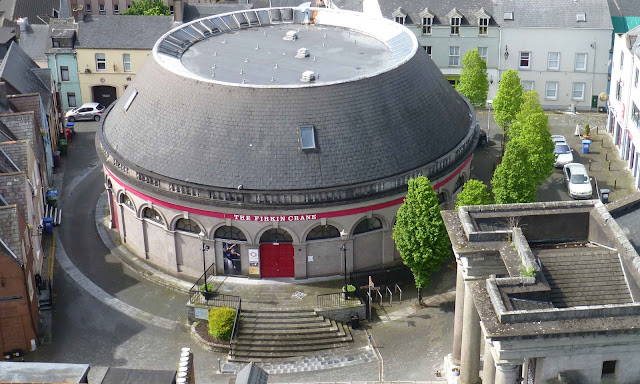 Your first stop (you can also make it your last, on the way down, if there is a queue on the way up) is on the first floor and here you can ring the old bells, made in Gloucester (where my parents were married) and installed in Shandon in 1752. They weigh over 6 tonnes.

Did you now that the rector here in 1772 was the Rev’d Arthur Hyde, the great-great grandfather of our first President?

The clocks, one on each face of the tower, were installed by the corporation in 1847, made by local watchmaker James Mangan. Atop the tower is “de Goldie Fish”. The Greek name for fish is ichthus and it was an symbol of Christ for early Christians. The motive is repeated in each of the seats in the church below.

As you mount those steps, you will see the mechanism of the clocks (3rd floor) and the actual bells themselves (4th). One that I saw is stamped “Prosperity to all”. Ear defenders are provided - use them here!

The 132 steps bring you, eventually, all the way to the balcony. You are at 120 feet but the pepper pot itself adds another fifty feet to that. The balcony though is more than high enough to give you fantastic views over the whole city. Take your time, take a break and enjoy.

“On this i ponder where’er I wander
And thus grow fonder sweet Cork of thee.”

Built in 1722, on a site of an earlier church that was destroyed in the 1690 siege of Cork, St Anne's is the oldest church in continuous use in the city.

It features a baptismal font from the original church, a font that was made in 1629. Other features include a Victorian timber barrel vaulted ceiling and an early 18th century barley twist communion rail.  The walls are adorned with memorials to families associated with the church including one commemorating George Benson, a curate of the parish who died in 1832 a victim of the cholera outbreak. And you’ll also see the fish cut-outs on the back of each seat, echoing the Goldie Fish of the tower.

St. Anne’s has been described as,  “the most important ecclesiastical structure of any period, within the the city of Cork and its immediate environs, it is also one of the most important early 18th century churches in Ireland and one of a small number which still retains their original 18th century bells”  - (2001 Architectural & Archaeological Appraisal – Colin Rynne for Southgate & Assoc.).

Read much more about the church, the tower, and the environs, including opening hours, here http://www.shandonbells.ie/ And, if you haven’t visited, do so soon even if it is just for the views. Maybe you’re nervous about playing those bells. No worries? You do it by numbers and a Japanese tourist told me my Amazing Grace was excellent!