Sky Walk on Valentia. Islands in the Sun

on November 08, 2016
Sky Walk on Valentia
Islands in the Sun 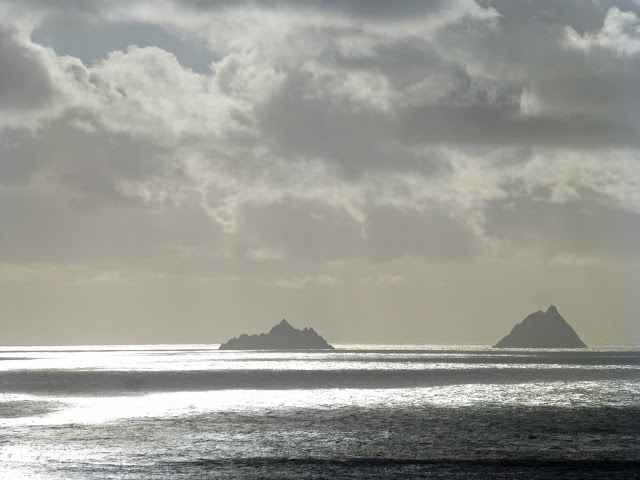 The showers were dying out as we drove through Portmagee and across the bridge onto Valentia Island last week. I had no detailed plan in mind. But I got lucky. And got to see some of the best views of the Wild Atlantic Way.
I had a vague notion of crossing the island and starting at Knightstown at the other end. Then I spotted a sign for Bray Head. I haven’t been there before. I said to myself. So I followed the road to the left. 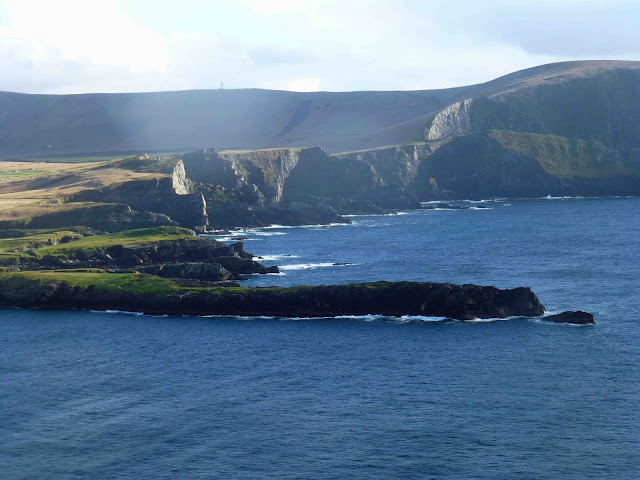 Soon I was in a decent sized car park and right here the spectacular views started, across to the mainland and out over the ocean to the islands including, of course, the Skelligs (the location for a recent Star Wars film). If I hadn’t travelled another step, I’d have been happy with the trip.
But there is a rough track (the soil has been stripped off) right to the top of Bray Head. Your destination is marked by the shell of a two storey building. The walk is easy enough and the rise is gradual but you will need good footwear. Rain gear too wouldn't go astray.
We felt a few drops and could see the showers out by the islands but luckily the blue sky prevailed and we enjoyed the most fantastic views, the light changing as the odd cloud came and went.

Then we saw a hare racing down the track towards us. He spotted us and broke off to his left. A good few seconds later, a pack of hounds came coursing down, noses to the ground, circling around where the hare had exited until they settled on his path. Think he got away though. A discordant moment, unexpected.
Back then to concentrating on the walk with lots of stops for photos, of course. I think it took us over 30 minutes to reach the old concrete shell and enjoy the views to the left and right. We could have continued a loop here but decided to go back down the way we had come.
On the way down, we stopped time and time again, looking back to the Skelligs, across to the cliffs and down towards the channel between the island and the mainland and the bridge of course.
Soon, we were climbing over the steps by the locked gate at the start/end of the walk. This is very close to the car park where’ll you’ll see a detailed map of the loop walk. By the way, there is a parking charge of two euro. A tiny price to pay for the opportunity to enjoy such beauty.
See also:
Irish Whiskey Experience Killarney
Climbing Torc Mountain
Crag Cave. Underground in Kerry
Bray Head Kerry Portmagee The Skelligs Valentia Island Wild Atlantic Way