on August 03, 2016
Radio On: Finbarr Donnelly, The Arc & The Cork Post-Punk Music Scene 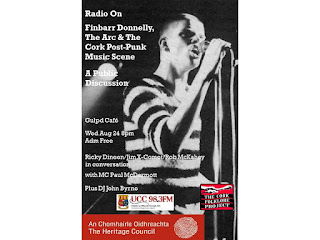 Radio On is a public discussion event based around the radio documentary ‘Get That Monster Off The Stage’ produced by Paul McDermott and first broadcast on UCC98.3FM. The documentary centres on Cork singer Finbarr Donnelly and his bands Nun Attax, Five Go Down To The Sea? and Beethoven. The event features Paul McDermott as MC for the evening, in conversation with -
Plus DJ John Byrne, playing records of the era afterwards until close.
The event takes place during Heritage Week and is supported by The Heritage Council, Cork Folklore Project and UCC98.3FM. It will also be recorded for future broadcast on UCC98.3FM and archiving by Cork Folklore Project.
Heritage Week - www.heritageweek.ie
Cork Folklore Project - http://www.ucc.ie/en/cfp/
UCC98.3FM - http://www.ucc.ie/ucc983fm
Facebook Event – https://www.facebook.com/events/1665168273803459/
For more information, interview requests etc., contact Conor O’Toole at  conorot@eircom.net, tel 086-8126413
Conor O’Toole & Paul McDermott are available for interview until Aug 5 & from Aug 17

‘Get That Monster Off The Stage’ features contributions from Cathal Coughlan & Sean O’Hagan (Microdisney), the late Mick Lynch (Stump), Giordaí Uí Laoighaire (9 Wassies From Bainne), the actor Liam Heffernan, journalists Declan Lynch & Shane Fitzsimons, Rory Cobbe (RTÉ), Morty McCarthy (Sultans of Ping FC), DJ & musician Jim O’Mahony, writer Cónal Creedon and more. It is available to listen to on this link.
https://soundcloud.com/paulmcder/get-that-monster-off-the-stage
Paul has developed a companion piece to the documentary, an Oral History, consisting of transcriptions from the documentary with additional interviews. Read that here.
http://bit.do/DonnellyOralHistory
Paul McDermott is also the producer of ‘Lights! Camel! Action!: The Story of Stump’, first broadcast in 2016. That documentary is available to hear on this link.
https://soundcloud.com/ucc98-3fm/lights-camel-action-the-story-of-stump
The accompanying Oral History is available here.
http://bit.do/StumpOralHistory
Currently, he is working on a radio documentary about Cork band Microdisney, for broadcast in 2017.