House of Light. Castlecoote in Roscommon

on May 07, 2015
House of Light
Castlecoote in Roscommon 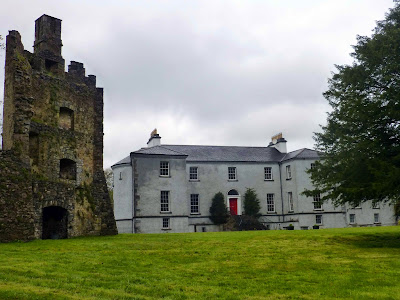 Sometimes in the late evening, Kevin Finnerty strolls around the grounds of Castlecoote House, with the River Suck for company on three sides, and he is thinking about the next stages of the restoration. He bought this place in 1996 when it was a total ruin, stripped of everything worth taking, including all its old fireplaces.
Sometimes, more often than not, the walk will take him into the old orchard at the rear of the house (some say the rear looks even better than the front). Here there are no less than 41 varieties of apple. There are three very rare ones, including one called White Crofton, George Bernard Shaw’s favourite apple!
Now, close to twenty years later, Kevin and Theresa have restored the Georgian house, faithfully. The latest big project is the restoration of the bridge (the original was destroyed in the Williamite Wars) across the Suck at the front of the house. This is already underway and may be complete in 2016, perhaps in time for the annual Percy French Festival.
The Festival, established by Kevin, has taken place annually in Castlecoote since 2009. Kevin’s father was involved in the Percy French festivals of 1957 and 1958. The festival is about the music of French but over the years has played on his name to focus on a particular subject and examine aspects of Irish life in detail.
The title for next July’s festival is Through a French Mirror. “Mirror, mirror on the wall. Now I see warts and all”. Over three days (8th-10th), life will be examined by a list of speakers that includes: Robert Ballagh, Lucinda Creighton, Professor William Reville, Kevin McStay, Dr Olga Cox Cameron, Dr Síle de Cléir, Bishop Kevin Doran, and Adelle Hughes. Musicians performing are Jon Henderson, The Mulligan Sisters and Johnny Duhan. Information and tickets here.
If you can't make it for the festival, it is possible to visit Castlecoote, one of four heritage house in the area, throughout the summer. You'll be amazed by the light inside. “There is not a dark corner in the house,” Kevin told us as he guided us around and explained how the windows were constructed, including a technique called splaying, to make the best of the light. The big room, where the lectures for the festival take place, is typical. 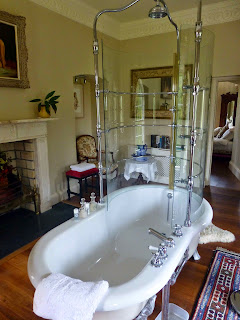 In 1989 the house, which incorporated some of the original castle, was gutted by a fire and only the outer walls remained. Today, thanks to the Finnertys, the 20,000 square foot six-bedroomed house (still incorporating parts of the castle - you’ll see the thick walls!) has magnificent stucco ceilings, marble fireplaces, oak floors, beautiful staircases and hand-crafted astragal sash windows. All the craft-work, all true to the original, was carried out by local craftspeople.

Kevin showed me the family coat of arms in one of the windows. It is also the coat of arms of the Mageraghty clan who, in the 1500s, had a fort on this site. Amazingly, they are the same family. And a link here to Cork. In 1603, Donal O'Sullivan the lord of Beare and Bantry was coming towards the end of his famous long march and was met near here by the Mageraghtys.
Castlecoote House is situated in the village of the same name, a few minutes drive from Roscommon town, which is two hours from Dublin, three from Cork.
See also: The Arigna Mining Experience
Clonmacnoise. An Important Site for Centuries
The Maltese Supper in Gleeson's Roscommon
apples Castlecoote House George Bernard Shaw Georgian orchard Percy French Festival River Suck Roscommon