on October 08, 2012
Cliffs of Moher
Struck it lucky weather-wise on a recent visit to the spectacular Cliffs of Moher. It is now more organised but also much safer than some of our early visits when, without a care in the world, we sat out on the ledge over-looking the massive drop to the sea below! Paths are now walled off but at a level that allows you to view the cliffs comfortably.

It is no longer possible to sit out on that apron of rock or even lie out on it as this gentleman may have done in 1835. “To lie down on these airy heights, and project the head beyond the edge of the precipice, is an act, simply though it may seem, that requires no little resolution. The watery depth below is an awful gulf to gaze into.” (Jonathan Binns 1835, quoted in the Visitor Centre).

Admission costs a reasonable six euro, four for seniors while, in a family friendly move, U16s go free. Your fee includes parking and entrance, both to the cliff walks and the visitor centre. There is also a large cafe there, toilet facilities and various shops, all built into the hillside.

As the sun was shining, we decided to make the cliff walk before going indoors. When you reach the cliffs, you can go left or right, or vice versa. Doesn't really matter. We took the right first and went up to the top of O’Brien’s Tower (built 1835), regarded as the best viewing point but one that will cost you an extra two euro. Back down the steps then and  up the walk to the south where again we got brilliant views, this time looking north of course. 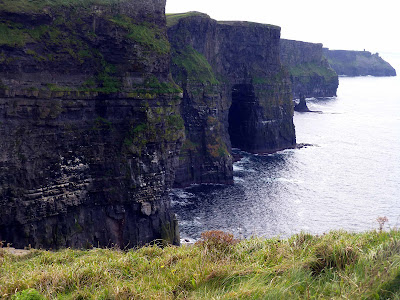 With lot of photos taken, we headed for the Cliffs Exhibition in the Visitor Centre. Must say I was very impressed with the exhibition, even though some of it is quite technical. One of the highlights for me was the Ledge Experience, a three screen five minute video of the 600’ cliffs, mainly shot from a bird’s point of view, though the cameras go underwater as well. Brilliant.

Lots of other information around the cave like structure, an eco friendly building by all accounts. Did you know that John Phillip Holland, who invented the submarine, was born in nearby Liscannor in 1841? Or that Guillemots lay pear shaped eggs? They are less likely to roll of the narrow ledges on which they are laid!

All in all, quite an experience, both inside and out. Now for the boat ride across the base of the cliffs!