Downtown at Shakers. Place to be 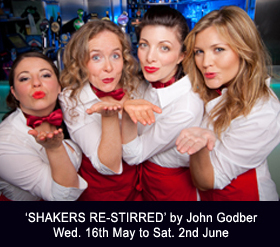 Shakers Re-Stirred
All human life is there, they used to say in a used to be newspaper. The phrase crossed my mind again last night when I joined the capacity audience to see Shakers Re-stirred at the Cork Arts Theatre

The whores and the cute whores, the snobs and the big nobs, the chancers and romancers, Beamer drivers and checkout operators, were all here on stage as this play from the early 90s, by John Godber and Jane Thornton, itself an update of the earlier Shakers (1987), took on a local identity and accent in a fast-moving version by the CAT Repertory Company.

Carol, Nicky, Mel and Adele are the four girls that crew the cocktail bar called Shakers and that is their core role. But that is not all they do. In a flash – there are no costume changes - they became a group of pals from the local supermarket planning a night out, or a bunch of loudmouthed Big Car type males, all customers at the bar.

There are many laughs along the way as the girls and the customers meet and often clash. Clashes often at the end of the tiring night when late customers trying to get in are stopped in their tracks by a foul mouthed blast from Mel.

Laughs continue as the supermarket girls prepare for the night out, particularly when they to go to buy their outfits. The fitting room scene is hilarious, particularly when Carol tries to fit her ample self into a jeans some two sizes too small. There is a certain grotesque choreography at work here (and in other scenes), bodies and faces pulled to sometimes unnatural positions, that had the audiences in stitches.

A quick switch back to the bar then and the cocktail waitresses engage again with the customers, particular the difficult ones. They each have their own way of coping but it is the chef that really gets his revenge with his notorious Seafood Pasta. He gets his laughs but it is the girls that have to tidy up the mess.

It is not all laughs - life is not like that, one observes. Their concerns come into sharp relief in the monologues: a baby after a broken love affair has Adele on edge while Mel carries the memory of an abortion when she was just sixteen. 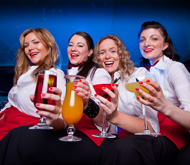 Remarkably, there are very few props here, not even a bottle or a glass. Everything, including the other customers, is imagined and the servings are mimicked by our versatile ensemble who regularly share “under one’s breath” comments about the clients with the audience.

While it has its hard edge, this is a work of comedy, quite hilarious stuff as the girls go through their paces. Well worth a visit and the prices here are so reasonable.

The show runs until Saturday June 2nd. Ring 0p21 4505624 for your tickets or check the website at http://www.corkartstheatre.com/