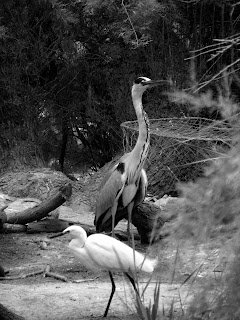 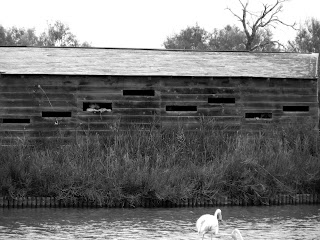 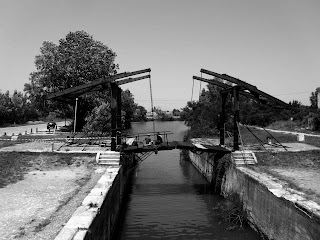 Sky changed from blue to grey as we headed towards the Parc Ornithologique at Pont de Gau, 4 km shy of the Camargue coast. Wasn’t expecting too much for my seven euro but it turned out to be of the best visits of the holiday as 2.5 kms of paths afforded close-ups of many birds and animals including the previously elusive flamingos, herons and also a close up of the non-native Ragondin, who we first met a few days ago in Roquemaure.
There is a series of enclosed eagles at the beginning but soon we are in open country, ducks, swans, and egrets among the first local birds seen as the temperatures remained high despite the cloud here. Then we arrived at the lakes and here there are hundreds of flamingos, some very close to the shore, obviously more used to people (but far from tame) than elsewhere in the area.
There are hides and viewpoints along the way but none where we came across the Ragondin. He was eating at the edge of a lake and wasn’t inclined to move so I got in close for a shot of an animal I hadn’t seen up to a couple of days ago. Apparently they are native to South America and imported to Europe at the end of the last century.
Herons are seen throughout the walk, usually standing in the shade of tall plants at the edge of the water. But I spotted one stalking his prey in the middle, not that I knew that until his head sped underwater and he emerged with a fish in his beak. Lighting strike!
Loads of other birds including egrets (and seagulls of course) as we headed back to the exit. Very enjoyable visit, aside from one or two bites from the local insects!
Took the opportunity to make a final nod to Van Gogh in sunny Arles. Thanks to Susie, our GPS “lady”, we found the Langlois Bridge, painted at least ten times by Van Gogh. However, like much of Van Gogh here, we were not looking at the original. It was destroyed in 1926 and was reconstructed slightly nearer to the centre of Arles. Still, the city is looking after it as council workmen were working on it when we arrived.
Original or not, it was nice to visit today and remember the man. Nice too to have been in Arles this past few weeks and seen the places associated with him. Lovely town.
Staying in for dinner to-night. That hadn’t been the plan but spotted some really inviting stuffed squid at the traiteur and that is now the centrepiece of the menu!
France Provence