If Nano Nagle were alive today she would be the kind of person to win a Nobel Prize. Before her death in 1784, Nano had opened 7 schools for poor children across Cork city, founded an almshouse for poor women, and most notably, founded the Presentation Order.

Born to a wealthy Catholic family in 1718, Honoria Nagle was given the pet name Nano by her father. The Nagle family home at Ballygriffin, near Mallow, was on the banks of the river Blackwater.

That first school was to become known as South Pres. Seven years ago the buildings - there were quite a few on the triangular site - of the South Presentation Convent were in a perilous position. The school closed its doors in 2006 and most of the buildings, some over 200 years old, sat empty with just a few resident sisters to maintain them.

The Presentation Sisters decided to act, just as their founder had done nearly two hundred and fifty years before. They set up a company, appointed a voluntary board, and put in place plans to redevelop ‘South Pres’ as a special place for the people of Cork City. These plans came to fruition in the middle of last year and now you may visit the café, the shop, the gardens, the historic buildings and the tomb, all free of charge. There is a heritage tour, mainly in the restored chapel, and there is a fee for this.

Probably best done when the guided tours are on - check the website! But we went around on our own last week, CL having a particular interest as she was educated here. 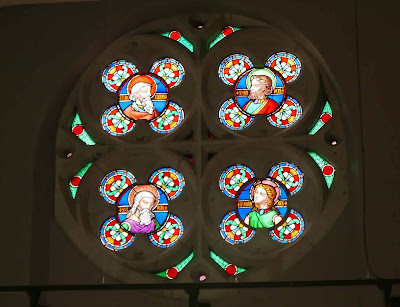 There is much about Nano, of course, and rightly so, including some artefacts such as her walking stick and double sided crucifix, and more. But there is much too about life in 18th century Cork and the terrible conditions that inspired the relatively well off Nano to undertake her work in education.
This work was undertaken at some peril as the penal laws, restricting education for Catholics, were still in force though not necessarily always enforced. The school here (on what was then called Cove Lane) was fronted by a bread shop to disguise its true purpose. You can see much more about the tour and the buildings here.

You get quite a lot of info when you pay on the way in and the pack includes an excellent leaflet on 18th century Cork with a map and many of the buildings from that period are listed and indeed marked on the map. Sounds like I'll be doing a long slow walk one of these days.

The Mansion House, “grand and imposing”, was one of the 18th century buildings and later became the Mercy Hospital.

Churches, mainly Church of Ireland, sprang up including Christchurch (now Triskel), St Paul’s and St Anne’s (Shandon), the Unitarian in Prices Street and the South Chapel in Dunbar Street.

The Crawford by the way, then housed the new Customs House. And, while you are in the Crawford, take a look at the Long Room and the Penrose Rooms “for a great taste of Cork in the 18th century”. Best of all, visit the Nano Nagle Place and get your hands on the leaflet!

Plan Your Tour
You’ll get all the info, hours, admission fees, parking and more, you need here http://nanonagleplace.ie/general-information/