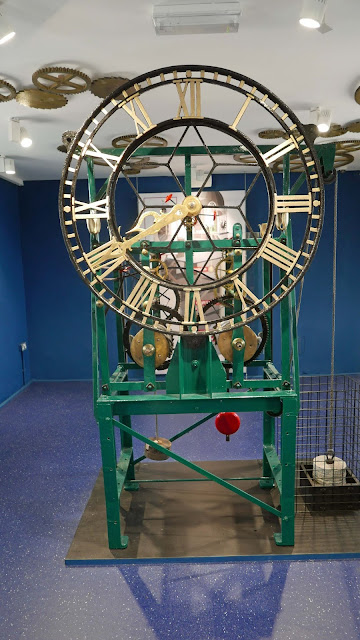 The Youghal Clock Gate Tower, the best known building of the seaside town in Ireland’s Ancient East, has been restored and is open to the public. There are guided tours on the hour and we called there last week. You can book on-line and also at the nearby Tourist Office. The gate to the tour is up a few steep steps off the street - you’ll see them. 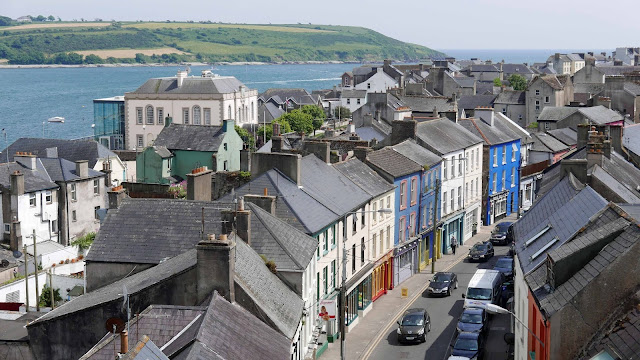 We are greeted by our guide Shirley and she tells us that there are four rooms here. The first helps give an impression of what Youghal was like, in the centuries before the tower was built in 1777. It was a very busy port, the fifth largest in Ireland, and was surrounded by walls (part of which still exist, the longest such in the Republic) in which a few gates allowed people in and out. Those coming in with goods for sale had to pay taxes at these gates.

One of the gates, known as Trinity Gate, was right here where the current tower is and, in 1563, was rented to a Melchior Bluet, a merchant. Wine and spices were among the imports handled here. Eventually Trinity Gate fell into disrepair and, in 1777, was demolished and replaced by the current building whose function was to serve as a jail. Total cost was two thousand pounds.


The 1777 rebuild was primarily a prison. It was a tough station with families, single children and more hardened blackguards thrown together in the small rooms with no segregation, no privacy. Some of the sentences mentioned were three months for stealing potatoes, the same for stealing a bow and fiddle, just one month plus a fine for illegal distillation but 12 months for stealing tobacco!

There was no glass in the windows only bars. No food either but prisoners were allowed drop baskets (with a rope) to the street below and hope that a family member or friend would send some food back up. You could also have a chat through the windows and maybe get a drop of the hard stuff as well. It wasn't a very good location for a prison and was closed down in 1841 and a new prison built nearby.
One floor is now given over to the clock story and Shirley tells us how the magnificent 350 old clock works. The bell dates from 1784. A few years earlier during the 1798 uprising, several members of the United Irishmen were publicly hanged from the Clock Gate windows and their bodies left to rot as a grim warning.
The story of the McGrath family, caretakers of the clock for much of the first half of the 20th century, is told in one room with artefacts from the period, including a 1937 wireless. The McGraths moved out to a new council home in 1959. There was a museum in the tower during the 70’s but it saw little use again until the recent renovations.


And we finish with a highlight, stepping out onto the viewing platform and great views over the town, the River Blackwater and the mouth of the harbour where the spices and wines once came in and found their way to the big houses upriver.

We enjoyed our visit, enlivened by our guide, and would heartily recommended it. And while you are in Youghal, there is much more to see including the fantastic ancient church (St Mary’s Collegiate Church is still operating) and the remains of these medieval walls. Check before you go and indeed when you arrive with the Youghal Tourist Office  on the quay. You’ll find the Clock Gate Tower website here. 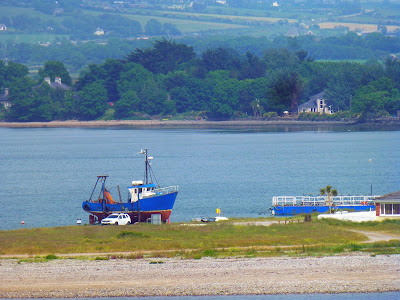 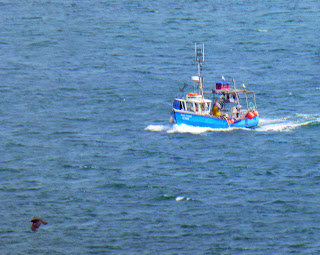