Spike Island, once a dead end for many, now open to all. What a tour!

The three Cork harbour forts have had a tough morning. And this 1940 August day is about to get a whole lot tougher.

But, just for the moment, the gun crew in Bastion 3 on Spike Island are feeling happy with themselves. Their six inch monster has done the business, sending its massive shells out beyond Roche’s Point to sink the biggest of the German ships. “Poor buggers,” sympathised one gunner as he saw the flames rise before the ship sank.

Soon though, the guys on Spike would be the poor buggers. A flight of Nazi bombers came swooping over the hill in Cobh, over the famed cathedral, and dropped bomb after bomb into the sunken fort at the top of the island. All hell broke loose!

Not really. Just one of those “what if” moments that came up during last week’s tour of Spike island. “What if,” asked our guide Ross. “What if the British hadn't been so prompt in handing back the treaty ports, including Cobh, just a year earlier?”

While Spike, whose fort was originally called Westmoreland (now Mitchel), was/is notorious in Ireland for its use, at various times, as a high profile prison, the military history is much longer and of huge interest to both Irish and British visitors.

The prison stories of course are many and varied and interesting, from the time it was used to house convicts who were sent to Australia and elsewhere in the 19th century and later Anti-Treaty prisoners who were detained during the Civil War. And then in the 1980s, it became known as the joyriders’ prison, bursting onto the TV screens and newspapers’ front pages in the summer of 1985 when the prisoners rioted.

The island has been recently opened as a tourist attraction, tours departing from Kennedy Quay in Cobh. We took the 11.00am ferry, best to book in advance particularly in high season. The trip takes between ten and twenty minutes. There is a famous sandbank between Cobh and the island, a sandbank that Queen Victoria’s ship got stuck on when she visited. When the tide is in, the ferry goes over the sandbank but when the water is low, the ferry has to circle Haulbowline Island before landing on Spike.

You are offered a guided tour. It costs nothing extra, so do take it. You will have over three hours here - sounds a lot but it may not be enough time, there is so much to see and do. The tour takes about 75 minutes and is well worth it. The guides are well informed, very helpful indeed. They’ll point out all the things you may visit and take you to the 1985 cells and Riot Exhibition, to one of the bastions with that six inch gun, explain to you about the Officers Quarters and the Soldiers Quarters (with its bomb proof roof) and more. 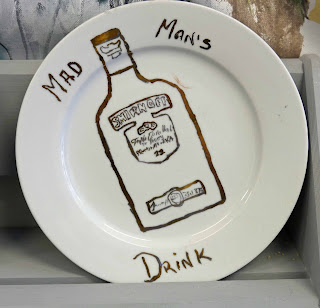 After that, you can go off on your own. One of the highlights is the Glacis Walk. This goes around the perimeter of the fort, is 1.4 km long and there are 12 information panels on the way. Great views of the harbour here, both inner and outer. And you are left in doubt how these big guns could control who was allowed in.

There are other walks, including one down to a group of derelict houses, known as the village. Our guide told us there were always civilians on the island. But that ended after the riot of 1985 when the prisoners marched down to the houses. The civilians eventually all moved out as a result, most of them to nearby Cobh. None of the civilians were injured in the riot as both they and the prisoners agreed that there was no issue between them.

The Mitchel Hall, an exhibition space, is probably the best looking block around the huge fort. By the way, during the riot, the prisoners got out on to the roof of the hall.

The Punishment Block dates from the 1850’s. You didn't want to be in here, chained in the darkness, clothed in black from head to toe. “Hell on earth.” There are quite a few more buildings worth looking at including the Shell Store (behind the punishment block). This, like most of the spaces, holds exhibitions.

You may have time to see the Convict Cemetery, the Gun Drill Shed, the Bleak House, the school, the Water Tanks, the flanking galleries and so much more in what, since the 1938 handover, is now known as Fort Mitchel (named after one of the more famous prisoners).

No shortage of facilities. There are toilets (one near where the ferry docks), an audio tour trail (in languages other then English), a first aid post, and a lovely airy café (with a rather modest food offering, scarcely a hint of the rich bounty of either the hinterland or ocean). There is also an adventure centre on the island but that is privately run.

Before you go, the best thing to do is check out Spike on the website here.  For more on the convict prison of Victorian times, get your hands on a book with the rather convoluted title Too Beautiful for Thieves and Pickpockets: a history of the Victorian Convict Prison on Spike Island, published by Cork County Library and Arts Service. The Examiner have an account of the 1985 riot, mainly through a retired guard’s eyes, here.

Best of all, go out and enjoy the trip and the tour. It is well worthwhile.