Visiting Valentia Island. Tracks of the Past.

on May 29, 2017
Visiting Valentia Island
Tracks of the Past.
Let’s go to Valentia Island. Lots to explore on this lovely island, including the tracks of an ancient, very ancient, tetra-pod, brilliant 360 degree views and bracing walks on the very edge of the Wild Atlantic Way.
Drive through Cahersiveen to the ferry terminal, just south of the town. Seven euros and a few minutes later and you’re landing at Knightstown, the capital of the island. The ferry service is continuous - virtually no waiting at all and the return fare per car is ten euro. 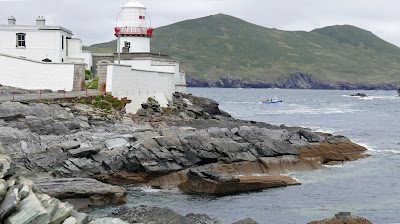 Stroll around Knightstown and its famous red-painted clock tower (late 1800s). Then it’s up the hill - don't head for Portmagee just yet - to a selection of places to visit. First is the working lighthouse at Cromwell Point, built (1841) over an old fort (Fort Fleetwood, built in 1653). You can see some of the original fort walls, incorporated into the light house.
It is a small lighthouse, about 15 meters high and, for a small fee (5 euro for adults, 2.5 for kids), you can visit and stroll around. There is a guide there to explain the history and point out the only one of twenty two cannon remaining from its time as a heavily fortified fort built as a precaution against possible invasions from the Spanish and the French.
An “invasion” of a different kind in modern times. There was a fair bit of damage around the lighthouse area in February 2016 when Storm Imogen struck. The combination of the storm and the Spring Tides produced enormous and powerful waves that hit the island for hours, moving massive rocks, flooding and destroying structures in their way.
There is no fee to view the Tetra Pod Trackway which is nearby and signposted. Park, and walk down the stony lane to the cliff. Here, roped off, you will see a series of footprints of a Tetra Pod, a large amphibian animal that walked on soft sediment here 385 million years ago! These footprints are now preserved in the rock as shallow impressions. There are a few of these trackways around the world. Tetra by the way means four while pod means foot and it is reckoned that this fellow was about a meter long.

A short trip away is the Slate Quarry, which had its heyday from 1818 to 1884 and provided very significant income for the island. After it closed, the government (in Westminster) provided two ships to enable hundreds emigrate to America. Below the mine, you can see a row of white houses built to accommodate miners from Wales whose experience was a big help to the venture. At its peak, the Valentia slate was famous and was used in the Paris Opera House and the Houses of Parliament in Westminster. A more humble use was to make tops for billiard tables!
Now you can, like we did, head for Geokaun Mountain, where you may drive or walk to the top. Entry for the drive is a fiver per car while for a pedestrian it is two euro. It is open all year round and the views at the top are 360 degrees and spectacular, taking in Valentia itself, the Skellig Islands, the Blasket Islands, Cahersiveen, and Dingle Bay. There are many information panels there. And also a side trip to see the Fogher Cliffs.

And if you drive up, you’ll have plenty of energy for Bray Head which is nearer Portmagee. The car park here will cost you just two euro and the walk affords great views out towards the Skelligs and to the Kerry Cliffs on the mainland south of Portmagee. We did this walk last year and there is a brief account here.
You’ve been seeing the Skellig Islands all day and, with your appetite whetted, you may need to know more. In that case, visit the Skellig experience before you leave Valentia. We didn’t as we were keeping it for a rainy day, a rainy day that never came, though we did get the odd heavy shower!
You may now return to Knightstown and the ferry or may prefer to leave the island by the bridge to Portmagee and continue your trip on the Iveragh peninsula. After decades of talk and promises, work began on the bridge in September 1967 and it was opened on New Year’s Day 1971. It is 600 metres long, with a central swing span to allow vessels through and was constructed by P.J. Hegarty Ltd of Cork. After Valencia, there is a lot more to see and do on the Skellig Ring and we’ll cover some of it in the next post.