on September 11, 2016
Ancient Castle to Oldest Lighthouse
24 Hours in Wexford.


Our 24 hour break in County Wexford begins with check-in at Killiane Castle. The welcome is warm and soon we are in a cosy room, just off the beautiful entrance hall, reviving with a cuppa and freshly made cookies. We are staying in the 17th century farmhouse which itself is built into the 15h century castle. There are also apartments in the yard.


This is a working farm and soon we are on a walkabout, past the gardens, the orchards and down through an archway of trees before turning right through the fields and completing the circle, with the river alongside, cattle, sheep and a horse or two grazing. And oh yes, we climbed the castle, being restored gradually.


And the farm is family friendly - you can see the cows being milked. There is croquet on the lawn, tennis on hard courts, pitch and putt, a driving range, a place for the children to play with some big toys scattered around. And this is only three miles from Wexford and close to the car ferry port of Rosslare.

Armed with the best of local knowledge and a taxi called for us, we head for the town that evening. Unfortunately, the rain pelts down as we arrive, curtailing a planned walkabout but we do get to see the statue, on Crescent Quay, of Wexfordman General John Barry, widely credited as The Father of the American Navy.
Our main purpose for the evening was dinner in Cistín Eile. This had been recommended, a recommendation that we can now heartily pass on. We enjoyed a couple of bottles of the local Cleverman beer there too.

Our taxi driver had earlier pointed out a “good pub” to us and we headed there. Little did I realise that Simon Lambert is the home of the very popular Yellow Belly craft beer. But, with some twelve craft beer taps along the counter, including four of their own, I soon realised I was in a micro-brewery. Loved their Pale Ale and also enjoyed Amberella by Cork brewery Eight Degrees link. 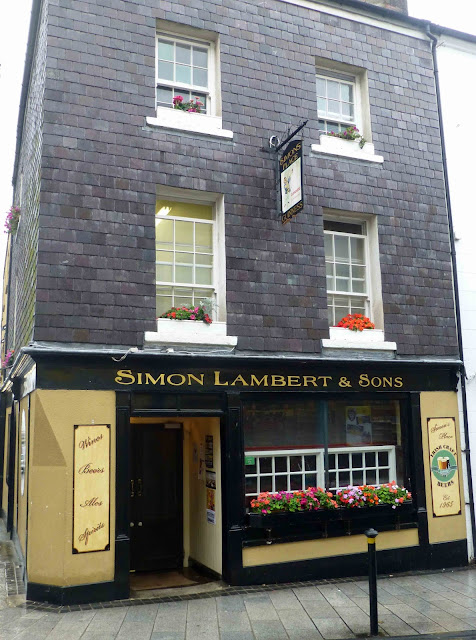 The following day started with a splendid breakfast in Killiane. I passed on the Full Irish and was delighted with their Baked Eggs with Wexford Cheddar Cheese, Cream, Chorizo and Mushrooms.

Then it was time to say goodbye to this lovely house and lovely friendly helpful family and head for the Hook peninsula. Our first visit here was to Tintern Abbey link built around the start of the 13th century by Welsh knight William Marshal in thanks for having been saved after a dodgy crossing from Wales. He populated his new abbey with monks from the original Tintern Abbey. The impressive tour costs a few euro, and is self-guided. There is also a cafe here.


And you might well need sustenance, as there are many walks (no charge) in the land and woods around. One such walk takes you to Colclough Gardens. The Colclough swere the family that later became associated with Tintern. Their gardens though fell into ruin but have recently been restored by a voluntary effort.


Again there is a small charge to see the 2.5 acre walled garden, which has a dividing wall. The first part is surrounded by a huge flower border, with fruit trees in the open spaces in the middle; the second part is largely given over to growing fruit and vegetables. The fruit and veg is available; you take what you want and payment is by donation.

Our main visit was to the nearby Hook Lighthouse and that is described here. It was not our first time here but the visit, with digital aids and lively guides, is much more interesting nowadays. You may also have lunch here, as we did. See full report here.


Loftus Hall, Ireland’s “most haunted house”, is nearby but we were running out of time (or courage!) and gave it a skip. Anyhow, as I've read somewhere, if you like a place, it is wise to leave something unvisited so that you’ll return.

We had entered Wexford by taking the motorway bridge over the river but now we would return by ferry link. There is a very frequent service - it costs eight euro one way and takes about twenty cars - between Ballyhack (on the Wexford side) and Passage East. Back in Waterford, we were soon on the internal ring road and heading, via Kilmeaden, for the N25 back to Cork, very happy with our 24 hours in Wexford.


The Archways. More than a B&B
Cistín Eile