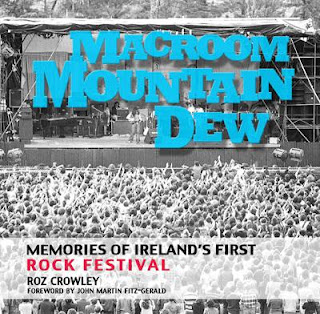 
Festival Vice-Chairman Martin Fitz-Gerald said he had been trying to get a book off the ground for over five years and it was finally take on by author Roz Crowley who wrote and published it through her company Onstream. He said he was delighted with the result and hoped it would bring back happy memories of the seven years of the festival from 1976 to 1982.


Author Roz Crowley talked about how much she enjoyed interviewing musicians for the book, and then talking to those who made the festival possible with their wide range of skills, as well as Cork and local people who attended the festival over the years. She also praised the reporting of journalists whom she quoted and whose on the spot analysis of the time added to the richness of the book. Editor of the Southern Star Con Downing was singled out as having written about all of the seven festivals. She thanked photographers from the Examiner newspaper and the newspaper itself for allowing access to their archives, and freelance photographers Herman Kemp and John Sheehan who supplied photographs, some of them never seen before.


Brother of Rory, Dónal Gallagher, told stories of the festival and some anecdotes about his brother.  He introduced Mike Lowe who was interviewed in the book. He is a partner in Britannia Row, who supplied the sound system for the two Rory concerts at festival. As in the book, he talked about how much he enjoyed the festival.


The book is available in bookshops and at www.onstream.ie.

They admit that they didn’t have a clue about how to run a festival. How would they? No-one had ever done it before, so when 13 businessmen came together they were not to know they would be making history.

In 1977, Ireland’s most talented guitarist, Rory Gallagher, attracted 20,000 fans to a quiet market town, with a population of 3,000, in north west county Cork for Ireland’s first major open-air event: the Macroom Mountain Dew Festival. An unforgettable moment in Irish rock history, the festival was a trailblazer.

The brainchild of a visionary group of Macroom locals, the Macroom Mountain Dew Festival was staged annually for seven years from 1976 to 1982 (the first one was mainly indoors) and featured some of the biggest music stars in the world. In this book the Mountain Dew Festival is celebrated with interviews with those who organised the festival, and with stars such as Rory Gallagher’s drummer Ted McKenna, his bassist of 20 years Gerry McAvoy, his brother Dónal, members of The Blues Band, Lindisfarne, Dubliners and many more. Top that with words from the people of Macroom on how the festival affected their lives, and insightful newspaper reports, for a nostalgic, but warts and all, view of what it took to make the festival what it was – a first.

Launched just in time for the fortieth anniversary of the first festival, the memories are captured with some photographs never seen before of this extraordinary time in Ireland’s history.

Roz Crowley is a freelance journalist, writer and editor of best sellers and prizewinners  which include Our Daily Bread, A Kingdom of Wine, The Lettercollum Cookbook, A Pinch of This.  A former regular broadcaster, she still contributes occasionally to programmes.

John Martin Fitz-Gerald is a leading businessman In Macroom, and was on the Board of Directors of the Macroom Mountain Dew Festival for all of its seven years.