The Holy Ground Once More. A Walk in Cobh

on April 18, 2016
The Holy Ground Once More
A Walk in Cobh
Took a walk in Cobh the other day (17th April 2016) and saw some things I hadn’t seen before, including a new marina and the Sonia O’Sullivan statue.


If you want to follow this harbourside walk, go to the first signposted car park, by Whitepoint. After passing Rushbrooke and its railway station, watch out for the free carpark signs that take you to the right, right down to the water’s edge. From here, it is just five minutes walk to the town centre. Unless you delay of course. Maybe the kids want to enjoy the playground or perhaps the adults want to try the exercise area (loads of machines there to twist and pull you into shape, maybe out of shape if you don't know what you’re doing!).

We were there for the walk so parked close to entrance. If you want to shorten the walk, park up nearer the town. First new thing I noticed was the new marina that has been set up with help from SECAD who are certainly trying to put South and East Cork on the map. This, directly across the water from the Naval Base on Haulbowline, should be busy during the summer.


We were now on the quay walk, called the five foot walk I think, the water to our right, the garda station to the left. And from now on, right into the early autumn, cruise-liners will be calling here regularly. You might be lucky enough to see one or better still look up the schedule and visit while one of these attractive vessels is tied up at the deep water dock. This is the list for 2016 and there is usually a mini-carnival atmosphere when a big one comes in.

They “park” - actually seeing one swing around in the water is amazing - right alongside the railway station and the Queenstown Heritage Centre, also worth a visit, details here. Queenstown was the British name for Cobh. The visiting Americans, or at least some of them, used call it Cob (like rob)-H.

So now we were away from the docking area, the deep water quay,  passing the famous Annie Moore statue and into Westbourne Place. Soon we see the beautiful Sirius Art Gallery and also the Tourist Office where you’ll soon find out that there is much to see and do in this harbour town.

A few minutes later, we stroll through the attractive promenade. There are some fine sculptures here, one commemorating arctic explorer Robert Forde, but the next “statue” that really grabbed our attention was the new life-size (maybe larger) tribute to Cobh running champion Sonia O’Sullivan, a world-class sportswoman and a great sport too.


Under the shade of the cathedral on the hill, there is a huge memorial to the Lusitania victims. And you can also visit the Titanic Experience and also book boat trips on the harbour, along with walking tours of the town and of nearby Spike Island.

Now, on West Beach (a street, not a beach), we approach the old clock tower, not looking its best the other day, but a very attractive building nonetheless. By the tower, with its Chinese Restaurant, take the left fork up through East Beach. There are some small signs indicating things to see in Cobh and we keep an eye out for those that point towards the Titanic Memorial Garden and Holy Ground. The name Holy Ground is ironic as the piece of ground was the town's red-light district in the 19th century.

We pass various plaques along our way to Harbour Row, one in the Holy Ground in honour of Cobh native Jack Doyle, the Gorgeous Gael, a boxer, Hollywood actor and accomplished tenor. All the while we have terrific views out to the islands and to Aghada and Whitegate to the east. Straight ahead, one can see the mouth of Cork Harbour, the second largest natural harbour in the world.

At the end of Harbour Row, there is a modest semi-circular car-park and a few seats inside the wall, maybe a few old-timers sitting there and taking in the view. East Hill rises up to the left but, you’re in luck as your destination is on the right via Connolly Street. Soon you’ll see a little pier, a few boats there including a clearly marked pilot boat or two. Now you are on The Mall and your destination is just ahead. 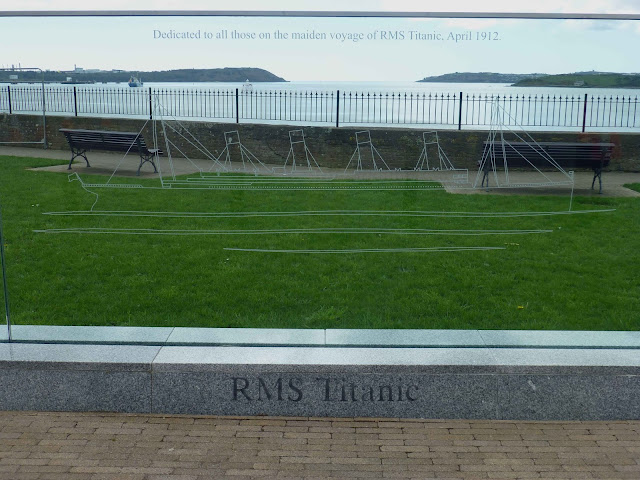 You pass a modest building as you enter the Titanic Garden but a very important and busy building as it is from here that all water traffic into and out of the port is monitored.


The memorial garden (SECAD are also helping this project) is a work in progress at present. The main piece is a glass wall directly opposite the harbour mouth. The middle section is dominated by a line-drawing of the Titanic and on either side are listed the 123 people who boarded her in Cobh, those that survived (44) marked by a star. 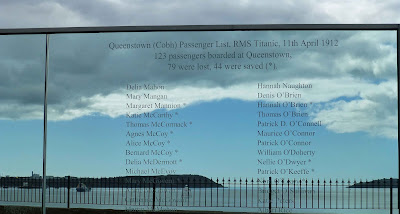 So a few minutes and a few photos later, we were heading back the way we had come. The round trip took about an hour but we had quite a few stops for photos and so on. It is all on footpath or street and there is a moderate rise towards the end but nothing too difficult! Enjoy.
See general map of walk here.
.