Atlantic Sea Kayaking. Into the dark, and then the light


Into the dark, and then the light

In a dark corner, with slim branches just overhead and rocks in front, I lifted a piece of seaweed from a floating bunch. Immediately it sparkled with white light, a string of “pearls” falling back into the seawater, one or two remaining that bit longer on the piece, even on my hand. Magic at night in a sea inlet in West Cork.

We are in a kayak with guide Jim Kennedy of Atlantic Sea Kayaking in another. We had met him at his base on Reen Pier (map here) on the eastern side of the inlet; Castletownsend (nearer the sea) is on the western side. We left the base sometime after sundown and now, ninety minutes or more later, we are like kids with a new toy. It is called fluorescence and comes from dissolved organic matter in seawater.

There was more of it in certain corners of the inlet than others and Jim knew exactly where to find the best examples. You have to slightly disturb the water - with your hand or paddle - to see it and then it sparkles and vanishes until you do it again.

Neither of us had seen it before. Indeed, neither of us had been in a kayak before. But with Jim, one of the most highly qualified in the field, looking after us, we relaxed into that confined space and enjoyed our two hours (two miles) that started with some fading light and ended in darkness (aside from some house lights in the area).

Bit by bit, we got into the swing of things but we weren't paddling all the time. Quite often we stopped, looked and listen. Jim told us where to look. We headed up the inlet, away from the sea. It was a calm night, not very cold. We were well wrapped up and had all the safety gear.

And it wasn't just looking and listening. We even used our noses as the teasing aromas of steak and onions drifted down our way. There were a few boats tied up in the area but most are rarely used but there was cooking going on in one! 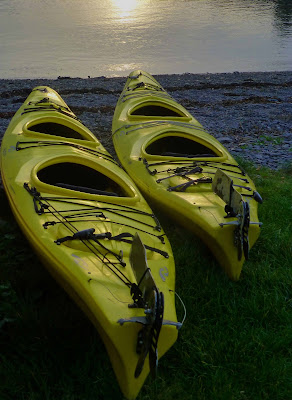 As the daylight ebbed, hundreds and hundreds of crows began to noisily gather. It happens this time of year (October), Jim told us. A big bunch would join up with another and they'd wheel and dive and then set off together to meet even more flocks coming in from all sides. We spotted a few egrets too, finding themselves spots for the night.

But the crows were the main attraction and they eventually settled in the treetops on the bank. The racket was enormous but, bit by bit, they quieted down and, eventually, there wasn't a sound to be heard.

It was dark now and other birds, including curlews, were flying unseen overhead, scooting past with quite a swoosh. They can see you, Jim reassured us.

Then we swung into a corner on the left, a “boats graveyard”. One wreck appeared like a ghost as we skirted a small island. A pause now to take in the peace of the place, the calm water, a leaf slowly spinning on the spot, making no progress. And then it was time to head back, crossing over towards the Union Hall side where the outgoing tide would give us a little push.

We were in no rush, taking our time under Jim’s gentle guidance. And then we stopped. In the dark. And then we saw that light! And would see it, and call it up, again and again as we meandered back. At this point, the two of us had little idea of where to find the beach. So just as well that Jim took us in tow and we paddled gently back to complete a two hour trip of nature's delights. 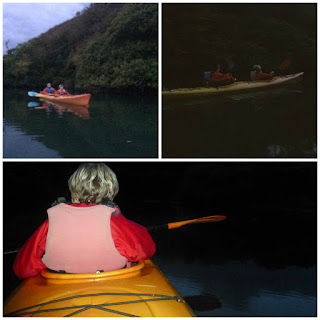 * It was a great day in West Cork. We started with lunch in Clonakilty, at Richy's Bistro. Then it was time for chocolate tasting as we visited Allison Roberts at Clonakilty Chocolate. Base for the night was Casey's in Union Hall. We had a neat and tidy room here, a room with a view over the lagoon in the fishing village. The bar was downstairs and great to see they had Black's Kinsale Pale Ale on draught. A couple of pints went down well at the end of a perfect day.
Atlantic Sea Kayaking Blacks of Kinsale Casey's Bar Castletownsend Clonakilty Chocolate Jim Kennedy Reen Pier Richy's Bistro Union Hall