Kinsale Harbour Cruise. All Aboard The Spirit

on September 22, 2015
Kinsale Harbour Cruise
All Aboard The Spirit


One of the advantages of being retired is that you can be ready to go out and about when the sun shines. It shone recently and we headed off to Kinsale to take the harbour cruise and then followed that up with lunch at the new Seafood Cafe in the Blue Haven.

The cruise is run by Kinsale Harbour Cruises on a double decker boat called the Spirit of Kinsale. The upper deck is open and the best one for the views; it is also larger, its comfortable seating accommodating about two thirds of the fifty passengers allowed. In season, they do three to four cruises a day.

They don't encourage bookings, just turn up at the departure point 15 minutes ahead of the cruise time. Timetable is here. During the forty five minutes cruise, there is an excellent commentary played on the public address, mainly in English but with some Irish inserts. Local tales, including that of the White Lady, are told.

However, non-English speaking foreign visitors are not catered for in the commentary and I didn’t see any information leaflets for them either. Considering the Spanish involvment in local history, a few words in that language would have been appropriate, particularly since there were a few onboard.


The boat leaves the marina, with the town on the left (port) side. Also on that side as you go on, you see the old village of Scilly and the massive Charlesfort. The Spirit of Kinsale makes its leisurely way in the direction of the mouth of the harbour to a point from where you have a decent view of the Old Head of Kinsale.

The boat doesn’t go out to sea and turns well before the mouth of the harbour and then, as you come back, you can see James Castle and the Blockhouse, again on your left. Of course, you can see these on the way out as well. There was plenty of sailing activity on the water and sometimes you may be lucky and spot some seals, otters, herons, shags and cormorants. 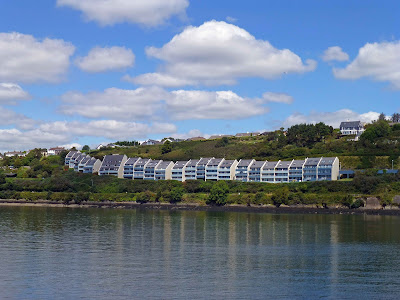 The Spirit of Kinsale then proceeds up towards the bridge over the Bandon River, giving some lovely views of the town, its hotels and houses, and the various docks and marinas before doubling back to the start/finish point.


It is a very pleasant trip indeed and luckily for us it was enhanced by the warm sunshine. We were welcomed aboard via the PA but I thought that there might have been a little more personal interaction with the passengers; there wasn't even the automatic “Have a nice day” as we stepped ashore.