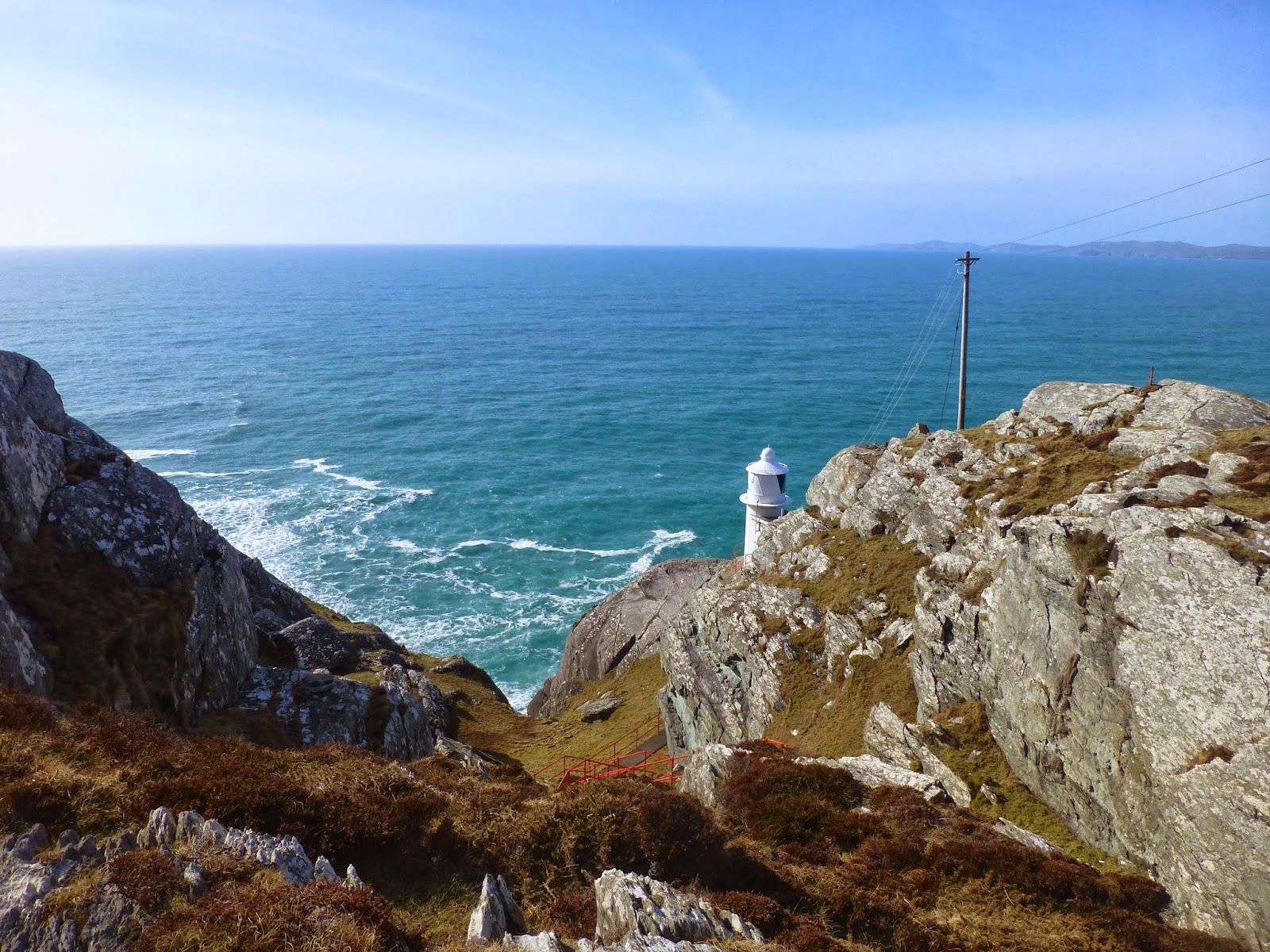 We went walking on the spectacular Sheep’s Head Peninsula in West Cork last Friday (7th March 2014). No! Not the whole peninsula, where there are something like 200 kilometres of great trails, but just the walk from the cafe (Cupán Tae)  to the lighthouse. Map & details here.
It was a beautiful clear blue sky day and, after a stroll around the Farmer’s Market in Bantry, we drove down the peninsula, getting great views to our right (north) and, then to both left and right, as we reached the highest point.
On the right, we had the magnificent Bantry Bay, the sky blue, the waters a stunning aqua marine and the Slieve Miskish and Caha mountains visible over on the Beara peninsula. To the left, we could see the Mizen peninsula, though not quite Mizen Head itself as that was half hidden by the nearer Three Castle Head. In the far distance, Fastnet Head was visible, looking very very small.
Continued the drive down now to Kilcrohane, the peninsula's only village and the location of a local producers market every Saturday (outside Eileen’s Bar from April 20th onwards). We turned right in the village and drove towards the head; the Mizen peninsula was to our left and now closer. Great views all the way and soon we reached the car park; the cafe, as expected at this time of year, was closed.


Changed the footwear, took a walking stick each and headed off past the few houses below us to our left. There are marker poles (about 4 foot high) along the way which is not paved or anything like that. Even for amateur walkers like us, the markers are easy to find on the way to the lighthouse; the powerline above is also a guide as the final pole is by the lighthouse.

After the recent bad weather, the walking route, normally uneven enough, was quite muddy and slippery and the sticks came in handy. They were also useful to gauge the depth of the muddy patches on the boggy sections. 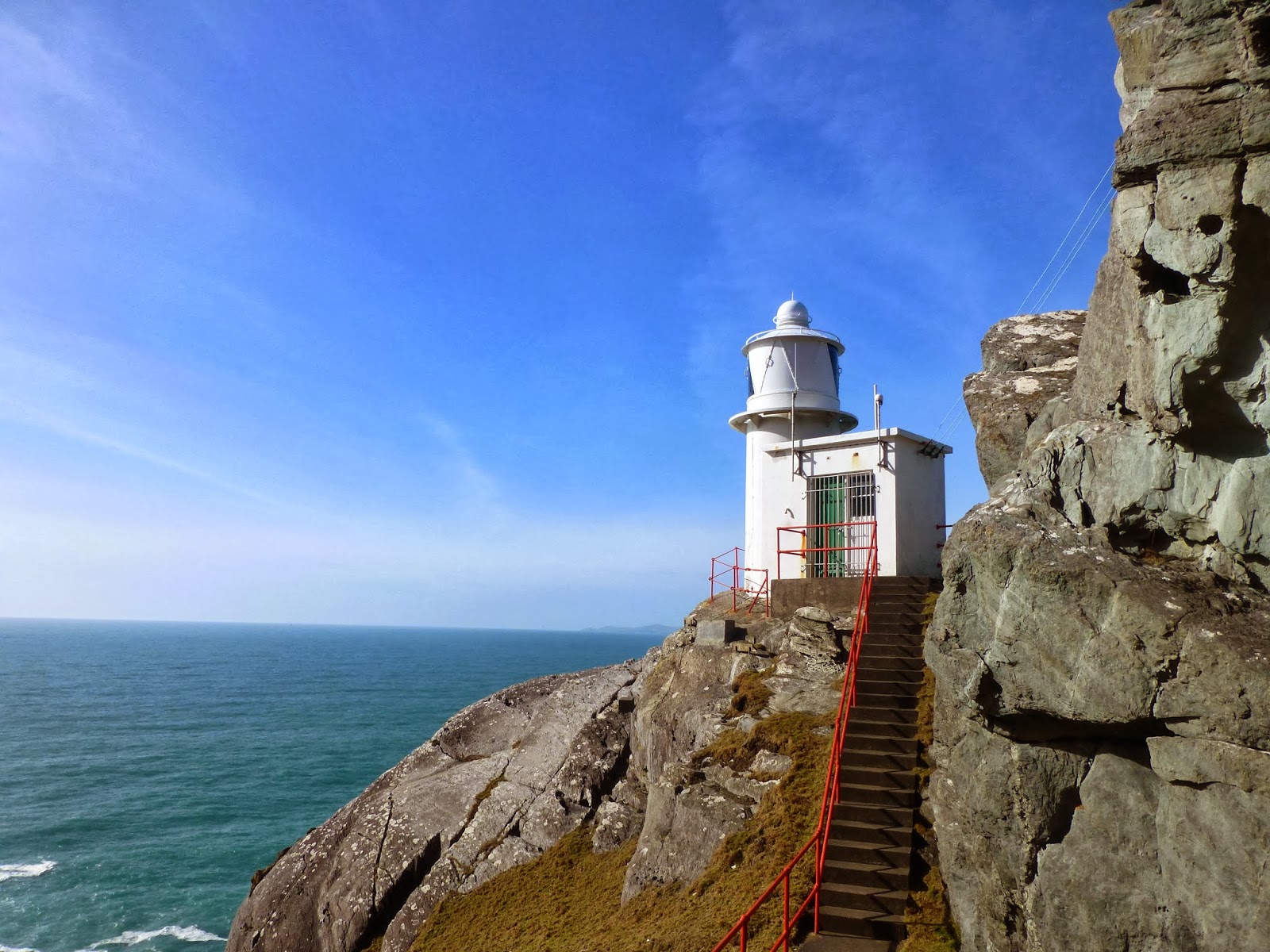 We had to be careful where the feet were going but made many stops to take in the views that were opening up on both sides, huge seascapes, rocky hills and a lake or two and a few sheep of course! And there was a stream to cross (there is a little bridge) and soon the end was near. Though not in sight!


The lighthouse itself is a bit of a tease. You don't see it until the very last minute, when you pass the “home-made” helicopter pad and the final marker and go through a gap in the rocks. And it is tiny. But obviously its business is seaward and it is doing a good job and must be a welcome sight to many a ship on the approaches to Bantry Bay and navigating that part of the coast in general.


Now, we had some navigating to do. The return trip awaited. And when you turn around, you might begin to wonder which way to go. But just pause and look for those little poles and you'll have no bother. In fact, though we didn't rush it, we got back more quickly than going out. It is a reasonably tough one - you won't get a buggy out there. But really well worth it! And, when Bernie’s Cafe reopens for the season, you'll be able to reward yourself with a cup of tea and a pastry.

* Note that we returned by the same track. There is a looped return as well. Details of both, including a route map, here