The Chastitute at the CAT
On the road to Abbeyfeale
I met a man with meal.. 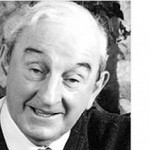 That chant, coming from the Bush radio in the corner, was my first encounter with the works of John B Keane (right). I had another last night (fifty years later!) when The Chastitute opened at the Cork Arts Theatre on Carroll’s Quay.

My opening lines come from Sive (1959). While there is more than twenty years between the writing of Sive and The Chastitute (1981), there are, of course, many similarities. The Chastitute is 53 year old John Bosco who has been trying hard all his adult life to lose his virginity. But Ireland then was a tough country for single men whose best days had faded away.

“Oh, the days of the Kerry dancing

Oh, the ring of the piper's tune

Oh, for one of those hours of gladness


We meet John with a glass of punch, his own potent mix, in his hand. Here the drink is presented as being part of the problem; at the end, it is part of his solution. In between, there are many tears but also many laughs.

John, too fast with the slow ones, too slow with the fast ones, has no luck with the women.. He enlists the help of the local matchmaker, well that was his aunt’s doing, and then the local ladies man, the sly slick Sylvie.

Sylvie gets him into some promising situations. And things seem to be going to plan on a visit to Cork but here John’s bedroom progress is stymied by the girl's mother who takes a fancy to him. Too much drink then and the girl falls asleep in his arms before any action.

At confession, the priest is wondering why John came to him at all with no real sin. “Go forth and fornicate properly” is the clerical order to the shocked chastitute.

Soon he is on the road to the Dublin show with Sylvie and ends up with a widow. A happy ending is on the cards until a bomb hoax intervenes. So no joy, only frustration, for John Bosco and for so many like him in the Ireland of the 50s and 60s.

The Cork Arts Theatre is a smashing little venue and last night there was a great rapport between the cast in general and the capacity audience. But Leo Conway, who plays John Bosco, enjoyed some extra special sympathy as he told his stories. Most of the others, experienced and accomplished actors all, had multiple parts and I just don’t know how they pulled it off but they were all magnificent.

All in all it is a terrific performance, well worth seeing. And the good news is that it continues every evening at 8.00pm from now until April 28th. This week’s performance cost just a tenner but the following two weeks the ticket price rises to €15.00. Still great value! This punter certainly enjoyed it.
Chastitute Cork Arts Theatre John B. Keane