A Visit to the Michael Collins House in Clonakilty


One of the newer attractions in West Cork is the Michael Collins House in Clonakilty. It is called after the Big Fella (he wasn’t that big actually, our guide told us) not because he lived here in Number 7 but because the people behind it wish to honour him and also because he did live in a house in the square from 1903 to 1905. But the records for Emmet Square were apparently destroyed during the Civil War and there is also some confusion as the house numbers may have been changed as well.

There is another square in the town, Asna Square, named after a 1798 rebel Tadgh an Asna O’Donovan. In the dining room at Number 7, we hear that O’Donovan led 300-400 rebels, armed with pikes, against the British “Westmeath Militia” in a bloody battle at nearby Shannonvale, the only action in Munster in that rebellion.

About 100 of the rebels were killed by the much better armed soldiers and their bodies disgracefully treated before being dumped on a local strand. The tales of bravery from what became known as the battle of The Big Cross inspired Collins.

And that burgeoning patriotism was further reinforced by the story of another West Cork man Jeremiah O’Donovan Rossa who, for decades, harried the British from Ireland and also from the USA. O’Donovan died in June 1915 and later his body was returned to Ireland where some 50,000 to 70,000 attended his burial and heard a rousing speech (the fools, the fools, the fools) by Patrick Pearse who six months later would be one of the leaders of 1916.

Ironically, these home-field influences were first turned into real serious steps not in Cork but in London where Collins was by now working with the British Post Office. Encouraged by the famous Sam Maguire, he joined the Irish Republican Brotherhood there in 1909. 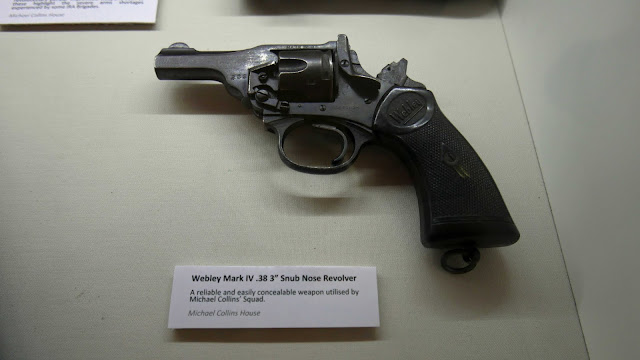 He returned to Ireland for the Rising and played a leading role in the War of Independence that followed. He was one of the leaders of the Irish delegation that negotiated the Treaty. It wasn't acceptable to all and a Civil War followed. Up to 4,000 Irish people died and Collins himself was one of the victims, killed in an ambush by anti-Treaty forces at Beal-na-Blath in August 1922. He was just 31 years old.

You can learn much more about Collins (about his romance with Kitty Kiernan for example and see footage of his funeral) on the guided tour which uses video, posters and informations boards and various artefacts. Check it all out, including opening hours, here