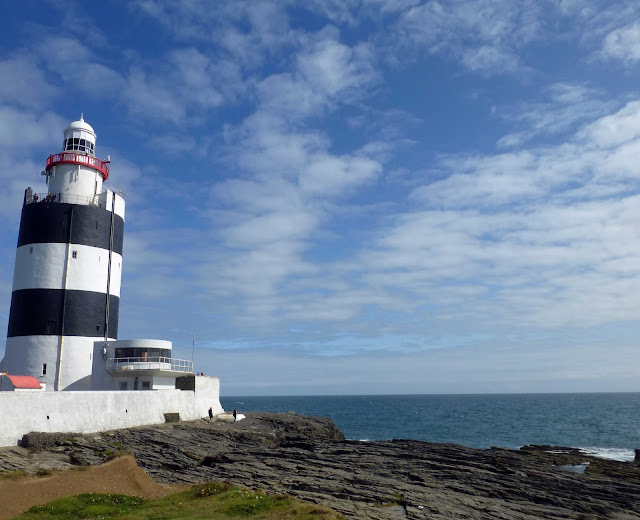 If these walls could talk. You say to yourself as you enter the 800 year tower that houses the Hook Lighthouse on the tip of Waterford’s Hook Peninsula.
You soon find out, they do talk. In the first room, with its ribbed vault structure just like the two rooms above, a monk, a digital one, appears and talks about when he came here in the 6th century (maybe!). He was Welsh and called Dubhain. Having founded a small monastery, he and his fellow monks noticed the many shipwrecks in the area and set up an open fire to warn mariners.
Good, but not good enough for the next person you meet, on the next floor. This is William Marshal, another Welshman and a powerful knight, who was very influential in the south east of Ireland at the end of the 12th and beginning of the 13th century. He built the nearby Tintern Abbey and the town of New Ross and more, including this lighthouse (sometime between 1210 and 1230). Monks were again in charge, living here, keeping the faith, keeping the flame.

As you climb the solid building, you see where the monks cooked, lived and slept. Many changes then during the centuries, before, in 1996, the lighthouse was automated and the light keepers (no longer monks!) departed after almost 800 years. And the modern keepers are commemorated on the third floor, projected onto the wall to tell their story.
Out then onto the windy balcony to take in the fabulous views over the seas, over the land. The famous bird sanctuary of the Saltee Islands is visible to the east and to the west you can see The Metalman, another landmark for mariners, this on a cliff near Tramore in County Waterford.
As well as the light a fog signal was operated at the lighthouse. For centuries a cannon gun was fired off the edge of the cliff during fog. This was replaced by a hooter, which in turn was replaced by rockets. In 1972 a foghorn worked by compressed air was installed.
That foghorn, about six foot high and with two “speakers”, can still be viewed in another room at ground level. Decommissioned in 2011, it still looks impressive. And then, Jason, our excellent guide, showed us another object. It looked like some kind of wooden box, except for the lever on its side. We didn't guess but it is an early form of foghorn, with nothing like the range of the big one, but still noisy enough when that lever is turned! Quite a few other ship related items here too, including a compass and morse code machine.

If you feel like a bite to eat after climbing and descending those 115 steps, well just head into the building next door where there is a cafe and bakery with soups and sandwiches and a selection of lunch plates available and plenty of space to sit and eat. And if the kids finish up before you do, they can wander out to the large grass area where there are quite a few big sturdy toys to keep them engaged. Watch out too for art classes and special events.
Quite a few walks too in the lighthouse area but be careful. Not all tragedies here have happened to people in boats.
Our guided tour was in English and it is also available in French, German, Spanish, Irish and Italian. Whales and dolphins can be observed from the shoreline around Hook Head with a good pair of binoculars. It is a great visit, to what is believed to be the oldest operational lighthouse in the world, and you can find out much more, even see a video visit, see the web cams too, on the website here. 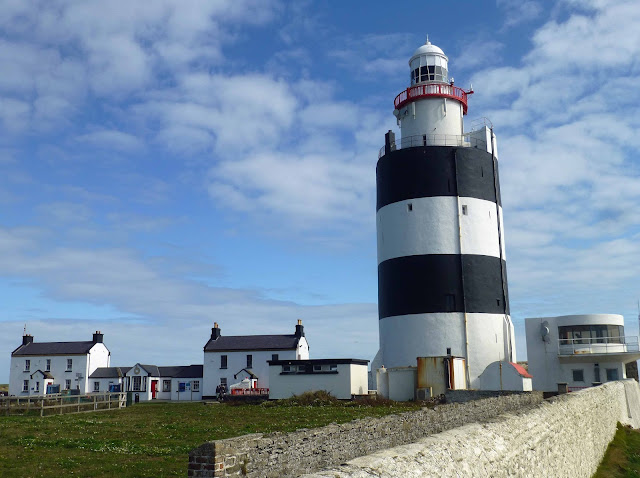