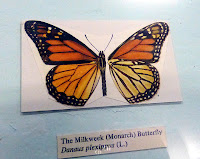 The wow factor begins the second you step into the ground floor of the Natural History Museum  in Dublin’s Merrion Street and see the impressive skeletons of the extinct giant Irish deer. But this fascinating place is not all about the big animals. It is very much about the small as well and you can see the tiniest insects.

All the ground floor is given over to Irish Fauna, much of it dedicated to marine animals, including invertebrate (such as jellyfish) to river and sea fish. Lots of mammals also (such as badgers and foxes) while there is also a big display of birds (some now rare, some extinct). 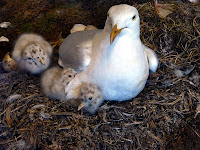 The museum, also known as the “Dead Zoo”, uses the second level to display its collection of the Mammals of the World. Some big ones here such as giraffes and elephants (bottom) and hanging from the ceiling is a fin whale, some 20 metres long, suspended above the smaller humpback.

On the north wall, there is the Barrington bird collection, mainly Irish birds along with some that migrate here. I was puzzled that many had been obtained by “striking” until I read in the leaflet that many crashed into Irish lighthouses. 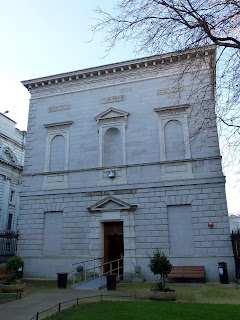 All in all, a fascinating collection for the child with you or the child in you. Admission is free but don’t forget the donation jar – help is badly needed here. The museum is part of the National Museum which has two other locations in Dublin (Archaeology in Kildare Street and Decorative Arts and History in Benburb Street); a fourth location is in Castlebar where Country Life is the theme. 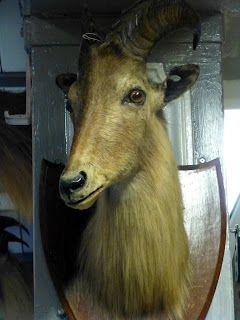