When Sharkey Met Ike.
Ex US Pres in Cobh. 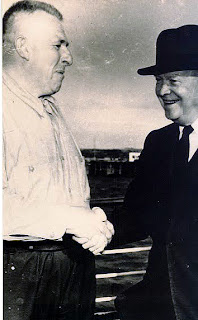 In August 1962, ex US President Dwight D. Eisenhower spent a few days in Ireland as part of a European tour. Ike was accompanied by his wife Mamie (who wasn't named in the photos I’ve seen of the time).

During an RTE interview, he said he didn’t believe there be a nuclear war but that was before the Cuban Missile Crisis in October 1962, a crisis that had us all on edge.

Generally though it was a relaxing visit. They stayed in the penthouse suite at the Gresham and he played golf, in the August rain, with Joe Carr in Portmarnock.

On the afternoon of the last day of the visit, I was on my way home, via train from Kent Station to Little Island. As I walked along the platform, I saw a small ceremony taking place with none other than Ike at the centre of it. A presentation was made on the red carpet.

Very few people seem to have been aware of it and years later I often wondered if I had really seen it. So I was glad to get confirmation in the summer of 2010. I was visiting an exhibition of old photos in the Sirius Gallery in Cobh, called the Wilson Collection,  when I saw a photo of the event.

I put an account of my Sirius visit on this blog here and also on Qype. Recently, I was contacted by Kevin Kibbey (UK), who had read the Qype review, and he told me his uncle met Ike in Cobh that time.

“My uncle was Jeremiah Griffin - everyone in Cobh knew him as 'Ger' or 'Sharkey'”. And, even better, Kevin had the photo that was taken of Sharkey and Ike! If there is anyone out there with memories of Ike either in Cork or in Cobh and you would like to share, then please get in touch at cork dot billy at gmail dot com