Caherlag-Glounthaune: A Walk in the "old country"

on February 28, 2012
Memories too came back of short-cuts across fields, including one big one where, one night, I got lost in the fog. And then the shortcut to the Railway station through a farm which now looks overgrown and far from its best days. Memories too of the families who lived in a small terrace of houses there and who moved on, some of them to Little Island.

Then passed fields where I hunted and caught rabbits and where there was a wrecked cottage (I think we knew it as Hegarty’s). There is a fine house there now and indeed many big houses on the way down.

As I got nearer Glounthaune, I saw the old cottage at my left towards the bottom of the hill and that, still looking good, well kept with lots of flowers, is totally dominated by the many large scale dwellings around it.

Now I came to the bridge, known as the Dry Bridge. This has been regularly damaged by careless truck drivers over the years. The area around it had been tidied up and the patch of green, where many a schooldays scrap took place, has vanished.


Moving north now and saw that all, or most, of the roadside streams have been covered. As kids we often delayed our trip home from school to explore the tiny life in the little pools but most kids don’t even walk now.

Came then to the familiar four cross roads. Here, the final “fights” of the day (not every day!) took place, the arguments now between the group from Windsor Hill and the group from Rougrane with the few from Carberytown/Lackenroe direction reinforcing one or the other or just going home as the fancy took them.

Up towards Rougrane now on what we used to call Twomey's Hill. Mrs Twomey's old railway carriages, in which she used to house her noisy flock of free range (before we knew the term) turkeys have long since vanished but great to see the family still farming the old lands.

Our communal water-pump used to stand at the next cross roads. Quite a meeting place, especially for the younger folks as it was we who generally had the job of drawing the water until the local scheme came in. The pump has long since vanished.


No sign either of the house of the Ross family. A rusted barn is all that remains in the yard. I used to do a bit of summer work for Mr Ross and the highlight of the day was the desserts prepared by his sisters. Main courses weren't bad either! Rusted roofs too in the next farmyard.

Here I pass a familiar wall, made with “Fair-faced” concrete blocks that I sold to the farmer himself (Mr O’Mahony), probably about 1970! Still standing.


I remember lots of funerals coming to the graveyard. And I must say, it seems to be looking better now that it did then.
Changes a plenty but I can’t complain as I moved away from the area before it moved away from what it had been. C’est la vie! 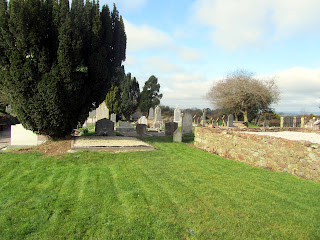 My Glounthaune days are covered, in some detail,here  and there is a set of photos, mostly from the early 80s here